The Mars Society is an international non-profit organization founded in 1998 by Dr. Zubrin and others and is dedicated to furthering the goal of exploration and the eventual colonization of the planet Mars. The society plans on achieving this goal through broad public outreach to instill the vision of pioneering Mars, by supporting more aggressive government funded Mars exploration programs around the world, and conducting Mars exploration on a private basis. More information is available on The Mars Society's website and the society's Founding Declaration. The members of the society are from all walks of life from scientists such as Dr. Christopher McKay, award winning filmmaker James Cameron, former NASA astronauts Buzz Aldrin and Scott Horowitz to scientists, engineers, plumbers, electricians, farmers, teachers and students. It is estimated that the society has over 4000 members and over 6000 associate supporters in over 50 countries around the world. The Mars Society has chapters in countries around the world including the USA, Canada, Austria, the Netherlands, Germany, France, Italy, Belgium, Poland, Spain, Mexico, Australia, and the United Kingdom.

To further the cause the society gives presentations on Mars Direct, promotes the teaching of science, astronomy and spaceflight related subjects in schools, campaigns for greater investment in space research, hosts annual conferences on Mars exploration and actively supports NASA, ESA and other space agencies in their on-going exploration of Mars.

Some of the society’s more notable technical projects include: 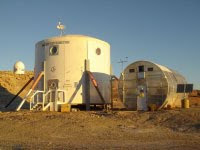 The Mars Society operates two Mars analog research stations: the Flashline Mars Arctic Research Station (FMARS) in Devon Island, Canada and the Mars Desert Research Station (MDRS) in Utah. Two additional stations are to be built in Europe (Euro MARS) and in Australia (Mars Oz). The purpose is to develop field tactics in Mars-like extreme environments simulating missions on the surface of Mars. I will post a more detailed account of the MARS Program in the next couple of days. 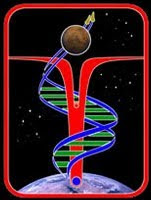 The Mars Gravity Biosatellite project is a joint venture of the Georgia Institute of Technology, the University of Queensland, and MIT. It began as a Mars Society initiative called Translife in 2001. The project's mission is to investigate the effects of Mars-level gravity on mammals by studying mice in Earth orbit in an artificial gravity (i.e. spinning) satellite. 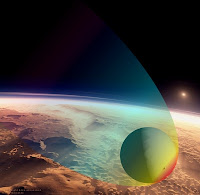 Archimedes is a small interplanetary space probe currently slated for launch to planet Mars in 2009. The probe is designed as a helium balloon ten meters in diameter. The onboard suite of scientific instruments is primarily geared towards the analysis of the atmospheric conditions on Mars. The device follows a payload proposal by the German Mars Society for a ride on AMSAT’s P5-A Mars orbiter.

Travel to Mars will take 6 months and current experience has shown that the zero gravity conditions will cause the astronauts muscles and bones to atrophy along with many other health effects. The TEMPO3 experiment is the first attempt to use a tether to generate artificial gravity for the crew and allow them to arrive at Mars physically fit for the busy schedule they will have on the surface.

Is an annual event where teams must build robotic assistants that will work with astronauts on future missions to the Red Planet performing a number of critical tasks. In particular, teams must tele-operate their rovers to: service an equipment panel, scout for and survey several remote markers, rescue a distressed astronaut in the field, and perform scientific reconnaissance in search of signs of life.

Spaceward Bound is an educational program organized at NASA Ames in partnership with The Mars Society. The focus of Spaceward Bound is to contribute to the training of the next generation of space explorers by having students and teachers participate in the exploration of scientifically interesting but remote and extreme environments on Earth as analogs for human exploration of the Moon and Mars. The program has been ongoing since 2006. The program is funded by NASA's Exploration Systems.

The planet Mars has an unofficial flag that is approved by and used by The Mars Sciety and the Planetary Society. The flag is rountinely flown at both Mars Analog Research Stations - FMARS in Devon Island and at MDRS in Utah. If you look closely you can even see the flag on the shoulders of the EVA spacesuits. It is not official in the legal sense because there is no government or other authority to adopt such a flag. In addition, the Outer Space Treaty states in Article II that "outer space, including the Moon and other celestial bodies, is not subject to national appropriation by claim of sovereignty, by means of use or occupation, or by any other means."

The flag of Mars is a tricolour with vertical bars of red, green and blue and is designated to portray the "future history" of Mars. The red bar which lies closest to the mast sybmolizes Mars as it is today. The green and blue symbolizes stages in which Mars is undergoing the process of terraforming. It was Kim Stanley Robinson's popular trilogy Red Mars, Green Mars, and Blue Mars that provided the concept for the flag and the design was originall proposed by NASA engineer Pascal Lee to Dr. Zubrin during a summer 1993 expedition to Deveon Island in Canada as task force leader for the Mars Society's Mars Analog Research Station Projects.

The flag now flies over the Flashline Mars Arctic Research Station (FMARS) on Devon Island, and is displayed in several places on the Mars Desert Research Station (MDRS) campus in Utah. It has also flown in space, carried aboard the space shuttle Discovery by astronaut John M. Grunsfeld on STS-103 in 1999. 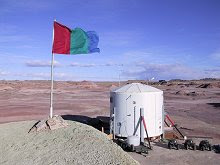 Posted by Laksen Sirimanne at 4:47 AM 2 comments:

NASA and Microsoft Corporation have created a website called "Be a Martian" (http://beamartian.jpl.nasa.gov/)  where internet users can advance their knowledge of Mars, take part in research tasks, and assist Mars science teams analyze data. I spent some time on this site and found it very interesting. There are a couple of different things we can do to help out the scientists. Users can help create an accurate map of Mars by mapping high resolution images to the appropriate position on the Mars surface, or count craters. Since craters act as time stamps: in that older areas of the surface have more craters, by counting the number of craters in a given area can help determine the relative age of that area. Very clever!

I have also attached a link to NASA JPL's Mars Exploration website (http://mars.jpl.nasa.gov/).
Posted by Laksen Sirimanne at 12:26 PM No comments:

There is an exciting new show tomorrow (Thursday, November 19 9PM ET/PT) on the National Geographic Channel - Expedition Week. called Mars: Making The New Earth.The show is about "terraforming" Mars from a cold, dry, uninhatiable desert into a living planet. The scientific advisors for the show include Chris MacKay of NASA AMES Research Center, James Graham of the University of Wisconsin and David Grinspoon of the Denver Museum of Nature and Science. The producers state that the source of the Mars-as-a-mountain analogy and factual details of biological terraforming for this episode are taken from James Graham's paper on "The Biological Terraforming of Mars: Planetary Ecosynthesis as Ecological Succession on a Global Scale" (Astrobiology, Volume 4, number 2, 2004).

A preview of the show can be seen here:

The producers/advisors state that the steps to "Terraforming Mars" include:

Enjoy the show.
Posted by Laksen Sirimanne at 7:02 PM 1 comment:

I just received an email from Artemis Westenberg who is the Mission Director for the Mars Society's Mars Analog Research Stations confirming me as a crew member on the 88th mission to the Mars Desert Research Station (MDRS). The mission will be from the 9th to the 23rd of January 2010. A big thank you to Brian Shiro for the introductions and recommendation. Brian will be Commander of the 89th mission to MDRS and we will be handing over the Hab to him and his crew on the 23rd of January. This summer Brian was a crew member of the very successful 12th mission to the Flashline Mars Arctic Research Station (FMARS) in Devon Island, Canada. He documented the mission in his blog site "Astronaut For Hire". I followed his mission closely and it was the inspiration that propmpted me to apply to be a crew member for the upcoming research season.

Naturally I am very excited and feel very privilaged to have been selected as a crew member of MDRS-88. I set up this blog to document the mission for my friends and family.

Posted by Laksen Sirimanne at 12:01 PM No comments: