Your Help Urgently Needed to Save the Future of Human Spaceflight, SpaceX

NO on H.R. 5781 Effort
"If you care about the future of American space exploration, your urgent help is necessary. The only hope for the average citizen to one day travel to space is in danger due to the actions of certain members of Congress. SpaceX does not have the enormous lobbying power of the big government contractors to stop them, however with your help the day can still be saved.

NASA's Authorization bill (H.R. 5781) will be debated on the floor of the US House of Representatives tomorrow. Despite the imminent retirement of the Space Shuttle, H.R. 5781 authorizes over five times as many taxpayer dollars to fly NASA astronauts on the Russian Soyuz than it invests in developing an American commercial alternative, moreover at a time when jobs are sorely needed in the United States. Quite simply, this bill represents the sort of senseless pork politics that has driven our national debt to the point where our economy can barely service it.

The bill is expected to be brought to the House floor this Friday under a special "suspension of the rules," which is a procedure that limits debate and amendments.

Telephone your Congressional representative right away via the House Switchboard at (202) 225-3121 to vote NO on H.R. 5781, and instead support the bill unanimously agreed to in the Senate last week.

Your five minutes will make a critical difference, ensuring an exciting and inspiring future in space travel! SpaceX rarely asks you to take action, so you know it really matters when we do.

--Elon--
Look up your representative here."


Update: I sent an email to Congressman John Campbell (48th District serving Orange County, California) urging him to vote NO on this bill. I applied to NASA twice back in 2003 and in 2008. While I am a proud supporter of NASA my chances of someday going to space hinges on commercial spaceflight taking off (no pun intended). We have to support commercial spaceflight and I will proudly divert my tax payer dollars towards this effort. This is the only way I see of making my dream come through.
Posted by Laksen Sirimanne at 5:07 PM No comments:

This week in Space with Miles O'Brien


This Week: The search for hazards from unknown near-Earth asteroids, the last shuttle fuel tank leaves factory, next round of workforce layoffs and NASA Administrator Charlie Bolden's Muslim comment.
Spaceflightnow.com
Posted by Laksen Sirimanne at 3:43 PM No comments:

Robonaut 2 prepares for flight to the International Space Station

Later this year the space station will have another crew member besides the standard complement of six station astronauts. The seventh crew member will be Robonaut 2 (or R2 for short) developed jointly by NASA and General Motors (GM). The primary purpose of R2 is to develop a robotic assistant that will someday work alongside astronauts both inside and outside the station. In this particular version, the 300-pound R2 consists of a head and a torso with two arms and two hands. This particular prototype of R2 will be confined to operations in the station's Destiny laboratory. However, NASA and GM expects that future enhancements and modifications may allow it to move more freely around the station's interior or outside the complex. "Testing the robot inside the station will provide an important intermediate environment. R2 will be tested in microgravity and subjected to the station's radiation and electromagnetic interference environments." Right now, NASA explains that interior operations will provide performance data about how a robot may work side-by-side with astronauts and as development activities progress on the ground, station crews will be provided hardware and software to update R2 to enable it to do new tasks.

Take a look at these pictures. GM designed and built the torso of Robonaut 2 not only to look like a human but also to work like one. With human-like hands and arms, NASA states that R2 is able to use the same tools station crew members use, especially tools that are used during EVAs. 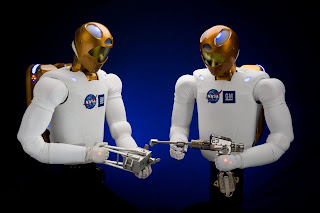 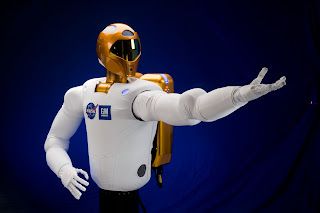 Credit: NASA/JSC
Robonaut is scheduled to be launched to the ISS on the STS-133 mission on space shuttle Discovery. Discovery, which had been scheduled for launch Sept. 16 is now targeted for liftoff at 4:33 p.m. EDT on Nov. 1.
Posted by Laksen Sirimanne at 1:27 PM No comments:


"We hold these truths to be self-evident, that all men are created equal, that they are endowed by their Creator with certain unalienable Rights, that among these are Life, Liberty and the pursuit of Happiness."
From the Declaration of Independence, July 4, 1776

Happy 4th of July!
Posted by Laksen Sirimanne at 7:49 AM No comments:


SpaceX website released this more detailed compilation of highlights from the June 4, 2010 Falcon 9 Flight 1 Mission in high definition on June 18, 2010. 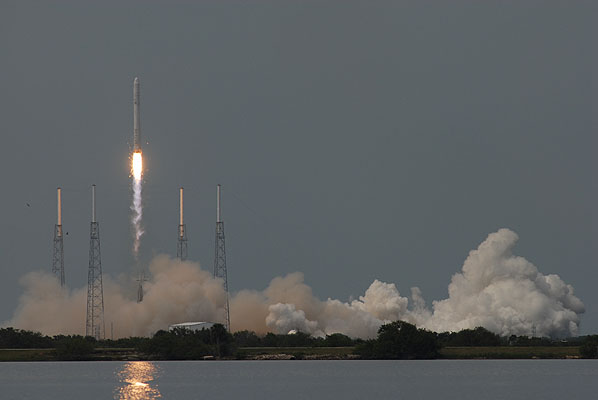 
I was not not able to watch the launch live via web cam as I was still at the Mars Desert Research Station (MDRS) in Utah as part of Crew-95. However, as soon as I got to Grand Junction (civilization), I logged on and watched the launch over and over again. I was absolutely thrilled and excited that SpaceX had achieved a successful first launch of the Falcon 9 and the Dragon mock-up. With the cancellation of Constellation and the Aries rocket and the Orion spacecraft, the Falcon 9/Dragon may end up being the only manned American spacecraft in the near future that can ferry astronauts to LEO. For those of us who dream and aspire to be astronauts this now appears to be the path towards achieving that goal. I had applied to be a NASA astronaut back in 2003 and 2008, but with a large pool of highly trained astronauts with few flights as ISS astronauts and no spacecraft (after the retirement of the space Shuttle in early 2011) it appears that the path to being an astronaut through our national space effort is soon becoming very limiting. I love NASA, I am so proud of what they have achieved, I have followed the Space Shuttle and ISS programs from their first flights but it appears that a new era of space exploration is just starting with several private companies tackling the challenge of commercializing space. SpaceX is at the forefront and they are down the road located in Hawthorne in Southern California (about 40 minutes drive from where I live in Irvine, Orange County). Every time I drive to LAX I try to locate their building which is located by the 405 and Hawthorne airport. Congratulations SpaceX, and best wishes for the second flight of Falcon 9 and the Dragon spacecraft. It is rumored that the second flight of the Falcon 9/Dragon is scheduled for some time in August/September.

Posted by Laksen Sirimanne at 7:36 PM No comments: