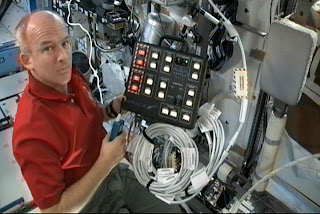 On March 11, SpaceX and NASA Houston performed an additional series of tests, using the new system to send communications between the ISS and the NASA Dryden ground station. This provided a baseline of the radio frequency performance and confirmed the first set of antennas performed as expected and is ready for mission operations. Additional testing is expected for a second set of antennas as well as ongoing verification of the overall system. "The success of this series of tests speaks to our close collaboration with NASA as well as the SpaceX process that allowed the rapid development of this new hardware," said Marco Villa, SpaceX Mission Operations Manager. "Furthermore, the January tests marked the first official joint operations between SpaceX Mission Control in California, and NASA Mission Control in Houston. Everything went smoothly, and we eagerly anticipate the upcoming Dragon visits to the ISS."

Developed by SpaceX under a NASA Space Act Agreement, the new system allows for communication between the ISS and SpaceX's Dragon spacecraft while in the vicinity of the ISS. Its design leverages the abilities of the ISS communication systems, providing data exchange with ground-based mission control. Designed from the beginning to transport crew, SpaceX's Falcon 9 and Dragon spacecraft were selected by NASA to transport cargo to and from the ISS starting in 2011. The $1.6B contract represents 12 flights for a minimum of 20 tons to and from the ISS. The first demonstration flights under the COTS program are scheduled for 2010, following the inaugural launch of SpaceX's Falcon 9 rocket.
Posted by Laksen Sirimanne at 3:15 PM No comments:


STS-130 (ISS assembly flight 20A) was the most recent Space Shuttle Mission to the International Space Station with primary payloads of the Tranquility Node and the Cupola. STS-130 launched on February 8, 2010 and landed back at KSC on February 21, 2010. the flight crew consisted of George Zamka (Commander), Terry Virts (Pilot), Kathryn Hire (MS-1), Stephen Robinson (MS-2), Nicholas Patrick (MS-3) and Robert Behnken (MS-4). Total Mission Duration of 13 days, 18 hours and 8 minutes. 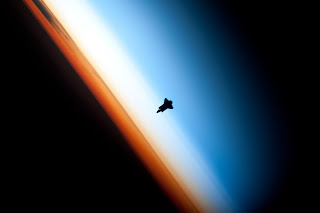 
"VSS Enterprise takes flight and space for the rest of us moves a step forward, the Martian Rite of Spring commences while the folks at JPL prep a "rover on steroids" for departure for the Red Planet, the Wizard Nebula is ready for its close-up, Roller Derby on Saturn's rings, Discovery is "go" for launch, orbital Olympics, the crew of STS-134 prepares to go where no one has gone before, and Buzz "Twinkle-Toes" Aldrin wows the judges on Dancing with the Stars - or (ahem!) not."
Spaceflightnow.com, 28 March 2010
Posted by Laksen Sirimanne at 8:36 AM No comments:


"Astronomers get WISE to a mysterious class of space rocks lurking dangerously near Earth and only visible in the infrared, workers at the Kennedy Space Center race to troubleshoot a valve problem with Discovery in hopes of keeping her on track for launch, a string of comets take a death dive, Jupiter's Great Red Spot gets the thermal imaging treatment, new views of the moons of Mars and Saturn, rover tracks on the moon, Bob Bigelow puts out the all-call for astronauts, the shuttle Enterprise may be old but she's apparently still up for a piggyback ride, shrimp on ice, and a helicopter crash only a dummy could survive."
Spaceflightnow.com, 19 March 2010
Posted by Laksen Sirimanne at 8:21 PM No comments:

Falcon 9 update: a successful hot fire of all 9 engines 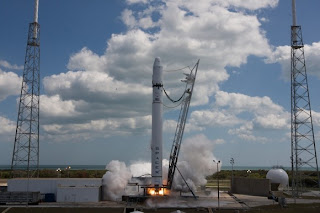 Photo credit: SpaceX
“On Saturday, March 13, SpaceX successfully completed a test firing of the inaugural Falcon 9 launch vehicle at Space Launch Complex 40 located at Cape Canaveral. Following a nominal terminal countdown, the launch sequencer commanded ignition of all 9 Merlin first stage engines for a period of 3.5 seconds.”
“This was the final step for the rocket and launch pad before launch itself."
SpaceX : 14 March 2010
The Falcon 9 is a two stage, liquid oxygen and rocket grade kerosene (RP-1) rocket that stands 180 ft (54.9m) in height and 12 ft (3.6m)in diameter with a LEO mass of 735,00 lb (333,400 kg). The rocket’s first stage is powered by nine Merlin engines with over 1.1 million lbs-f of thrust. The second stage is powered by a single Merlin engine. In 2008, NASA awarded SpaceX a $1.6 billion contract to resupply the International Space Station with cargo and an option to order additional missions for a total contract value of up to $3.1 billion.
The countdown for the inaugural Flacon 9 flight is scheduled for the 12th of March which by the way is the 49th anniversary of Yuri Gagarin’s first flight. This first flight will carry a Dragon spacecraft qualification unit to LEO.
Posted by Laksen Sirimanne at 4:08 PM No comments:

Miles O’Brien interviews astronauts, Lori Garver and Ed Weiler at the IMAX Hubble 3D Movie at the premier held at the Smithsonian’s Air and Space Museum. The movie is scheduled to open at IMAX theaters nationwide on March 19 (a definite MUST see). Falcon 9 has a successful engine test of its nine Merlin engines on Saturday March 13th. Finally, an interview with Shuttle Program Manager John Shannon who says he can continue flying the Shuttles if funding of $2.4B/year is available. This funding is currently not available beyond 2010.
Posted by Laksen Sirimanne at 6:41 PM 1 comment: 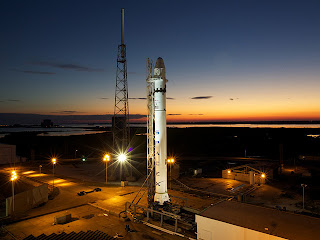 Photo credit: SpaceX
Tuesday’s Static Fire test for the Falcon 9 was counted down to T-2 seconds and aborted on Spin Start (the process that fires the engines). The following is the latest update from SpaceX sent out today:
“The problem was pretty simple: our auto start sequence didn't issue the command to actuate (trigger) the ground side isolation valve to open. The ground side isolation valve releases ground-supplied high pressure helium to start the first stage engine turbo pumps spinning at several thousand rpm. That generates enough pressure to start the gas generator, which is a small rocket engine that powers the turbo pump. There are no vehicle side valves actuated for spin start (just check valves), so it is an all engines or none situation. Ignition fluid (TEA-TEB) flowed nominally to all engines creating the green flame and the main valves opened, but no engines actually started and the system automatically aborted on lack of spin. The fire generated was from flushing the system of fuel and LOX from the open mains. 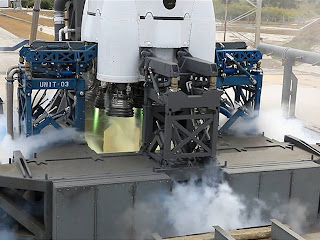 “Right now, we are holding due to extreme weather. It is raining sideways at 46 mph and tornados have been spotted just north of the Cape. If all goes well, we will try the static fire again in the next few days.”

The inaugural Falcon 9 rocket launching a Dragon test unit on a demonstration flight is currently scheduled for April 12th from launch Complex-40 at Cape Canaveral, Florida.
Posted by Laksen Sirimanne at 1:14 PM No comments:

The latest on the Falcon 9 Static Test Fire 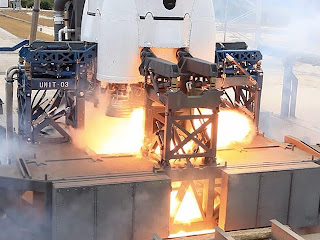 Photo credit: SpaceX
"Today SpaceX performed our first Static Fire for the Falcon 9 launch vehicle. We counted down to an T-2 seconds and aborted on Spin Start. Given that this was our first abort event on this pad, we decided to scrub for the day to get a good look at the rocket before trying again. Everything looks great at first glance.

We completed pad preps on time and with good execution. The integrated countdown with the range included holdfire checks, S- band telemetry, C-band, and FTS simulated checks. We completed helium, liquid oxygen (LOX), and fuel loads to within tenths of a percent of T-zero conditions. Tanks pressed nominally and we passed all Terminal count, flight software, and ground software abort checks right down to T-2 seconds. We encountered a problem with the spin start system and aborted nominally.

As part of the abort, we close the pre-valves to isolate the engines from the propellant tank and purge the residual propellants. The brief flames seen on the video are normal burn off of residual LOX and kerosene, similar to what occurs when we do stage firings at our test site in Texas. No damage occurred to the vehicle.

We detanked and safed the vehicle and launch pad. Preliminary review shows all other systems required to reach full ignition were within specification. All other pad systems worked nominally. Inspections will be complete tonight. Tomorrow will consist of data review and procedure updates. Commodities will be replenished tomorrow including TEA TEB load, LOX and helium deliveries. We'll look to do the next static fire attempt in three or four days."
SpaceX, 10 March 2010

I have to tell you, I can't wait to see this rocket launch into orbit next month. This is truly exciting! SpaceX is located close to Los Angeles airport in Hawthorne, CA. Go for it SpaceX we are all rooting for you.
Laksen
Posted by Laksen Sirimanne at 12:37 PM No comments:

David Levine on his experience at the Mars Desert Research Station

David Levine was designated as "Crew Journalist" for our crew on MDRS-88. But he was much more than that. He was one of our mission engineers, our IT specialist, and our EVA suit specialist. On top of that he assisted in the resconstruction and assembly of a Radio Telescope. He was also an excellent cook and could mix all sorts of rehydrated foods into an excellent meal. He is an exceptional individual with a great sense of humor. We all enjoyed having him as part of the crew and for me it was certainly a great privilage to serve alongside him on Crew-88.

This is a video of his talk at Ignite Portland LIVE.

Posted by Laksen Sirimanne at 10:10 PM No comments:

Inside the International Space Station

Isn't this incredible? Don't you wish you could go there and see for yourself and experience the thrill of visiting what is probably the greatest construction project.

Posted by Laksen Sirimanne at 8:48 PM No comments:

This week in space with Miles O'Brien

Another great episode from Miles O'Brien discussing water on the Moon, Buzz Aldrin on his Unified Space Vision, Discovery at the launch pad (STS-131 is scheduled to launch on April 5th), SpaceX Falcon 9 is at the Cape gearing up for a static fire of it's 9 Merlin Engines...

Posted by Laksen Sirimanne at 9:17 PM No comments: