This Week in Space with Miles O'Brian

Space Shuttle Atlantis (STS-132) launched today on its final flight carrying a crew of six veteran astronauts to the International Space Station. The crew consists of Ken Ham (Commander), Dominic Antonelli (Pilot), Garrett Reisman (MS1/EVA1), Michael Good (MS2/Flight Engineer/EVA3), Stephen Bowen (MS3/EVA2), and Piers Sellers (MS4/Loadmaster/Lead Robotics Officer). Launched this morning from Pad 39A, Atlantis reached an orbital insertion altitude of 122 nautical miles (226km) at an orbital inclination of 51.6 degrees. It will rendezvous with the ISS at an altitude of 190 nautical miles (350km). The mission is scheduled for 12 days with a landing at the Cape on May 26, 2010.

STS-132 is also designated as ISS assembly flight ULF4. The primary payload is the Russian built Rassvet Mini Research Module (MRM 1). The MRM-1 will contain an airlock and radiation heat exchanger, a spare elbow part for the European Robotic Arm (ERA) and a portable work platform for science hardware for performing experiments. The volume for cargo and science hardware storage on MRM 1 is 5 cubic meters. 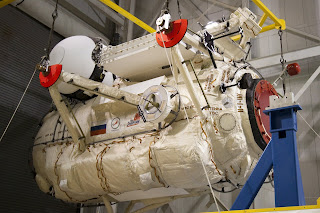 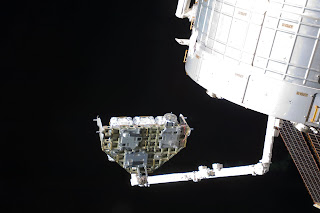 Integrated Cargo Carrier-Vertical Light Deployable Pallet
Photo: NASA
This will be the 163rd American spaceflight and the 132nd shuttle mission since STS-1. It will be the 32nd flight for Atlantis (and also its last flight).
Posted by Laksen Sirimanne at 8:52 PM 2 comments:

It was an incredible mission, blessed with awesome weather, science, engineering, and adventure. Oh what fun we had!
Posted by Laksen Sirimanne at 8:46 PM No comments:

Mars500 Simulation: My friend Diego Urbina has been selected as one of the ESA astronauts

The European Space Agency (ESA) has selected my friend and MDRS Crew-88 colleague Diego Urbina as one of two European crew members for the Mars500 simulation. Diego is 26 years old, has both Italian and Colombian citizenship and has a wide range of experiences working in the space field. He was an Attitude and Control Systems engineer for the Aramis nanosatellite at the Polytechnico di Torini, an operations and astronaut training intern at ESA’s Neutral Buoyancy Facility in Cologne, was a member of the Image Reversal in Space (IRIS) experiment that eventually flew aboard the International Space Station (ISS) and most recently was Crew Biologist for Crew-88 at the Mars Desert Research Station. Diego has a BS and an MS in Electronics Engineering from the Polytechnico di Torino, in Turin Italy and an MS in Space Studies from the International Space University, in Strasbourg, France.
The second ESA crew member is Romain Charles. He is 31 years old and is a Quality Manager for Sotira, a company producing composite panels. His previous experience includes Quality Engineering roles within the company for McLaren, Aston Martin and Tesla Motors. Romain is a citizen of France and resides in Saint Malo, France. He has a MS in Engineering from the French Institute of Advanced Mechanics.
Congratulations Diego and Romain on your selection to the “prime crew” for the Mars500 simulation! 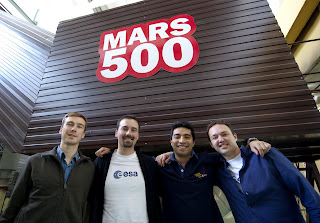 ESA Candidates
Photo: ESA
In addition to Diego and Romain, the Mars500 crew will consist of two Russians and one Chinese to be announced shortly. The crew is expected to begin the 520 day simulation next month (June). 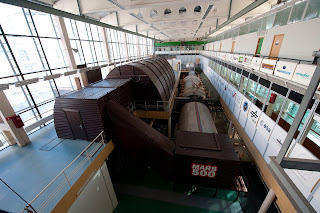 The Simulation Chamber at the IBMP
Photo: ESA
The Mars500 is a joint experiment between the Institute of Biomedical Problems (IBMP) and the European Space Agency and is a 520 day simulated mission to Mars. The sealed mockup includes an interplanetary spaceship, a Mars lander and a martian landscape to simulate extra-vehicular and surface simulations. The facility is housed in Russia’s Institute of Biomedical Problems in Moscow. The entire complex is approximately 550 cubic meters and consists of several habitation modules. The crew will live and work like ISS astronauts in that they will follow a seven day work week with two days off (except when special and emergency situations are simulated) and will conduct scientific experiments, maintenance and a daily routine of exercise. The food and supplies for the entire 520 day simulation will be stored within the chamber and the crew will have to manage their consumptions throughout the mission. Communications will only be via email and will have a forty minute delay, as on a real Mars mission. During Mars surface operations the crew will be divided into two groups of three people each. Once the first group exits to the Martian surface, the hatch between the Martian simulation module and the rest of the facility will be closed by the second group and only be opened again when the Mars surface stay simulation has ended.

Diego training on a modified Orlan Spacesuit
Photo: ESA
The purpose of the Mars500 simulation is to gather data, knowledge and experience to help prepare one day for a real mission to Mars. The study will help determine key psychological and physiological effects of being in such an enclosed environment for such an extended period of time. Best wishes Diego and Romain for a very successful mission. 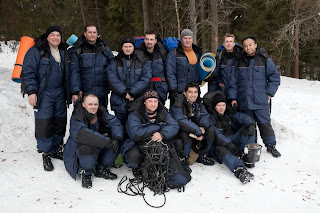 
"Counting down to the last scheduled launch of shuttle Atlantis, a space robot race between the U.S. and Japan, plans to bring a piece of Mars to Earth, and attack of the Zombie Sat!"
Spaceflightnow.com
Posted by Laksen Sirimanne at 6:08 PM 2 comments: 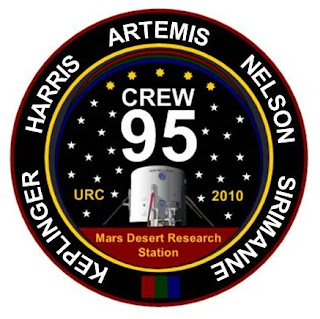 I will be returning to the Mars Desert Research Station (MDRS) next month as an engineer on Crew-95. The crew for this mission will consist of MDRS veterans Artemis Westenberg, Keith Keplinger, James Harris, and Joshua Nelson. This will not be a research/science mission but rather a refit mission to prepare the Hab for the next research season as well as the summer program put together by Dr. Penelope Boston. During our stay at the MDRS, the Mars Society will be hosting the University Rover Challenge (June 3-5, 2010) where teams of university students will be bringing a new generation of Mars rovers for a series of challenging tests. This will be the fourth University Rover Challenge hosted by the Mars Society.

This is the Oregon State University's 2010 Rover: 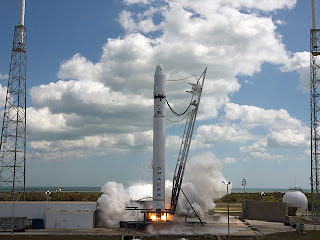 Photo credit: SpaceX/Chris Thompson
"As we continue to progress towards the first Falcon 9 launch from Cape Canaveral, certification of the flight termination system (FTS) and subsequent range availability remain the two primary schedule drivers. Air Force Range safety requires the FTS system, which allows them to safely end the launch should the vehicle stray from its designated flight corridor. The system consists of a command receiver and an ordnance system designed to split the vehicle's fuel and liquid oxygen tanks in the event of an errant flight. SpaceX is working closely with Ensign Bickford to complete testing of the explosive elements of the FTS system, but there are other components, such as the FTS radios, antennas and the transponder that come from other suppliers as well. All of these components must be qualified specifically for our flight environments, so unfortunately, it is not simply a case of buying “off the shelf”. FTS testing is an iterative process where the number of remaining tests depends on the results of previous tests, making it very difficult to predict a completion date. Once testing is complete, final data is submitted to SpaceX and Air Force Range safety officials for review and acceptance. Much of the range calendar for May is already reserved for other activities, so range availability will be a key factor in identifying a launch date. Fortunately the FTS is the last remaining significant milestone--the vehicle is otherwise ready for flight, so once we complete certification, we will be “all systems go” for launch."
SpaceX update: May 6, 2010
Posted by Laksen Sirimanne at 9:23 AM No comments:

"The Final Countdown" - Repost from SPACEPORTS

I just had to re-post this great video from Jack Kennedy's blog site SPACEPORTS. Jack has a great blog and I am a daily visitor and if you get a chance please visit as he is very up to date on the goings on in the space community.

This was from his recent blog post titled "Atlantis on Final Countdown to May 14". This will be the final mission for Atlantis (STS-132).
Posted by Laksen Sirimanne at 7:40 PM No comments:

Remembering the First American in Space - Alan Shepard (May 5, 1961)

Forty nine years ago, Alan Shepard Jr. piloted the Freedom 7 spacecraft (MR-3) and was the second person, and the first American to travel to space. Launched on May 5, 1961 he was launched on a Redstone booster which carried him to an altitude of 166 miles and to a splashdown 303 miles down range from Cape Canaveral. His 15 minute 28 second flight achieved a velocity of 5,134 miles per hour and pulled a maximum of 11g's. Alan Shepard was awarded the NASA Distinguished Service Medal for his flight by President John F. Kennedy.

A copy of the NASA Freedom 7/MR-3 Mission Report is attached:
NASA Mercury-Redstone 3 - Freedom 7 Mission Report
After MR-3, Shepard served as capsule communicator for the flights of Gus Grissom and John Glenn, and was backup pilot for Gordon Cooper.

Alan Shepard went on to command Apollo 14 along with Edgar Mitchell (Lunar Module Pilot) and Stuart Roosa (Command Module Pilot). Launched on a Saturn V rocket on 31 January, 1971 Shepard and Mitchell landed their lunar module Antares on February 5 in the Fra Mauro highlands.

NASAJSCER — April 12, 2010 — NASA will launch the first human-like robot to space later this year to become a permanent resident of the International Space Station. Robonaut 2, or R2, was developed jointly by NASA and General Motors under a cooperative agreement to develop a robotic assistant that can work alongside humans, whether they be astronauts in space or workers at GM manufacturing plants on Earth.
http://robonaut.jsc.nasa.gov/
Posted by Laksen Sirimanne at 12:16 PM No comments:

The Hubble Deep Field - The Most Important Image Taken

Hubble Space Telescope: 20 years of Astonishing Images of our Universe

NASATelevision— April 26, 2010 — The Hubble Space Telescope is one of the greatest technological achievements in our history, and for two decades has astonished us with dynamic images of our solar system and the world beyond. To celebrate this important twenty-year milestone, NASA looks back at the contributions of this extraordinary scientific tool, and the scientists who created it, in an engrossing documentary entitled "Hubble: Twenty Years of Discovery".
Posted by Laksen Sirimanne at 2:57 PM No comments:


"Steven Hawking warns us about aliens, the military launches a space shuttle, NASA helps keep an eye on oil slick off Louisiana, and the countdowns are on for Atlantis' final scheduled flight and Falcon 9's inaugural flight."
Source: Spaceflightnow.com
Posted by Laksen Sirimanne at 2:16 PM No comments: