Posted by Laksen Sirimanne at 8:50 PM No comments:

This week in Space with Miles O'Brien


"An exclusive interview with SpaceX's safety officer delves into the post-flight review of the Falcon 9 test launch. Also this week, the final shuttle missions slip out and John Glenn enters debate about the space program's future."
Spaceflightnow.com
Posted by Laksen Sirimanne at 6:17 PM No comments:

SPECIAL EDITION: This week in Space with Miles O'Brien - interview with Elon Musk of SpaceX


"In this special edition of This Week in Space, SpaceX boss Elon Musk speaks to Miles O'Brien about the successful flight of his Falcon 9 rocket and hits back at critics of the rocket's role in the Obama space plan."
Spaceflightnow.com
Posted by Laksen Sirimanne at 7:52 AM No comments:

SpaceX targets June 4th for the first launch of Falcon 9 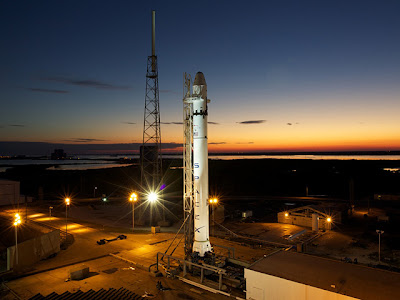 Photo: Chris Thompson/SpaceX
In an email press release, SpaceX announced that they are targeting Friday, June 4th for its first test launch attempt of the Falcon 9 rocket and Dragon spacecraft prototype. The schedule driver for the Falcon 9 test launch for the past several months has been certification of the flight termination system (FTS). The FTS ensures that Air Force Range safety officials can command the destruction of the vehicle should it stray from its designated flight path.

"The successful liftoff of the recent GPS satellite launch last Thursday freed up the necessary range resources to process our final documentation, and we are now looking good for final approval of the FTS by this Friday, June 4th, just in time for our first launch attempt. Today we completed end to end testing of the Falcon 9 as required by the Air Force Range and everything was nominal. Later this evening, we will finish final system connections for the FTS. Tomorrow we plan to rollout in the morning, and erect the vehicle in the afternoon."

If the weather cooperates, SpaceX will provide a live webcast of the launch events, presently scheduled to begin 20 minutes prior to the opening of the launch window.
Posted by Laksen Sirimanne at 6:20 AM No comments: