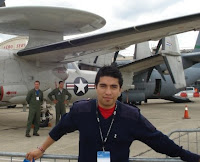 Diego is of Colombian and Italian nationalities, but considers himself as a citizen of the world. He holds a BSc (2006) and a MSc (2008) in Electronics Engineering with a focus in microelectronics and optoelectronics, both from Politecnico di Torino, in Turin, Italy. During his postgraduate research, he designed and simulated a Star Compass for the Aramis nanosatellite. In 2006 he was an ERASMUS scholar for a year at the Universidad de Cantabria, in Santander, Spain.

In 2008-2009 he was an ESA and SES scholar at the International Space University (ISU). He completed the Space Studies Program (SSP) in Barcelona, Spain, working on the design of a framework for volcanic activity data convergence. Afterwards, he obtained a MSc (2009) in Space Studies from ISU in Strasbourg, France, with, among others, a project on the use of Augmented Reality (AR) in space operations and a team project on a system of in-situ data collection for Climate Change.

Together with a team of students from more than 14 countries and the collaboration of CSA, ISU, NASA, ESA and CNRS, he worked on the Iris experiment that studied the perception of ambiguous figures in space, and flew this project on ESA's 50th parabolic flight campaign, before it was delivered to the International Space Station to be executed during expeditions XX and XXI.

In summer 2009 he joined the Neutral Buoyancy Facility (NBF) team as an intern at the European Astronaut Centre in Cologne, Germany. Diego supported and devised new enhancements of the Extravehicular Activity (EVA) simulations, contributed to NBF personnel qualification, created a basic training lesson on EVA for the European Astronaut Candidates, and implemented an Augmented Reality system for Astronaut briefings.

He is currently volunteering as a visiting lecturer in schools and the Maloka Science Museum in Colombia, motivated by his will to show the benefits of space and science to kids before he enters the space industry full time. At MDRS, he is interested in experiencing first-hand the problems that arise in a planetary settlement, and during its EVAs (helping solving them), and seeding tropical plants in the Greenhab.

Diego is fluent in English, Italian, Spanish and has an intermediate level of French. He loves scuba diving, hiking, playing football (soccer) and graphic design.
Posted by Laksen Sirimanne at 3:56 PM