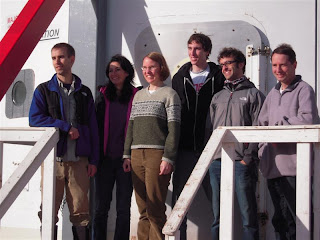 The next crew will be MDRS-89 (January 23 to February 6, 2010). The Crew commander for this mission will be Brian Shiro. Brian is a Geophysicist by training and works for the National Oceanic and Atmospheric Administration (NOAA) in Honolulu, Hawaii. He is on his second mission to a Mars analog after having spent a month at the Flashline Mars Arctic Research Station (FMARS) this summer. I followed Brian's mission at his blog site Astronaut For Hire and also through the FMARS web page and was so inspired by the research done, I too wanted to participate and contribute to the efforts of The Mars Society. It was also Brian that made the necessary introductions that got me the invitation to be a crew member of MDRS-88. Brian, it was great finally meting you.

Carla Haroz has been appointed Executive Officer and Engineer. Carla spent ten years working for NASA and most recently has been accepted to pursue her Ph.D in Bioastronautics at the University of Colarado.

The Crew Astronomer for MDRS-89 is Mike Moran. He is a Physics and Astrophysics undergraduate at Michigan State University. You can follow him at his blog site Inside a Calculator.

The fourth member of the crew is Darrel Robertson who will serve as Chief Engineer. It appears that the crew (and the Hab) will be in good hands with Darrel. He has a PhD from MIT in Aeronautics and Astronautics, spent two summers at NASA JPL and is currently designing a robotic bird for remote exploration and reconnaissance. Darrel lives in Dayton, Ohio.

Luiz M. R. Saraiva is the Crew Biologist and the Health and Safety Officer. Luiz has a Ph.D in Genetics and Neurobiology from the University of Cologne in Germany. He is currently a Postdoctoral Fellow at the Fred Hutchinson Cancer Research Center in Seattle.

Rounding out the crew is Kiri L. Wagstaff who will serve as Crew Geologist, Information Officer and Journalist. Kiri has a Ph.D in Computer Science from Cornell University and an MS in Geology from the University of Southern California. She is currently a researcher at the Jet Propulsion Laboratory (JPL) in Pasadena, California. You can also follow her on her blog at http://www.wkiri.com/today/.

Crew-89, best wishes for a very successful mission at the Mars Desert Research Station.
Posted by Laksen Sirimanne at 6:25 PM

Thanks for the introduction to our mission, Laksen. I was honored to meet you and your crew and thank you for handing over the Hab in such good condition. On to Mars!