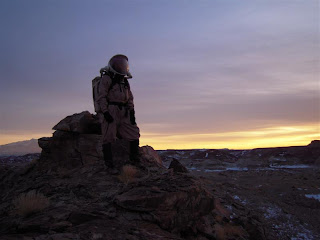 "On top of the world"

It was another beautiful day on Mars. I woke up to watch a spectacular sunrise over Turtle Hills with beautiful clear blue skies. The East port hole on the upper deck is just above my computer work station and is one of the best spots in the Hab. It was crispy cold outside with temperatures around 17F this morning so we decided to have our first EVA a little later in the morning. 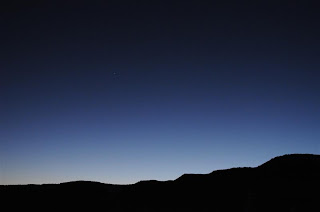 Breakfast consisted of prepackaged Flat Bread and Strawberry Jelly and two cups of black tea. The crew briefing took some time if I remember right, as we had two major EVAs planned for today. Paul and Diego went on a long EVA this morning to collect biological samples as part of the spacesuit mobility study (EVA#11). Diego is studying the effects of wearing the Analog Simulation Suits (ASSs) on EVAs. There is obviously a clear difference in mobility and ability to work wearing a bulky spacesuit and gloves and the limited visibility of the helmets, however the purpose of his study is to quantify the time it takes to do tasks in a Mars analog environment so that we can do a better job during EVA planning. He has a very interesting protocol and I hope he gets to publish his results some time soon.

The Chief Engineer (that's me) was put to work this morning with some trouble shooting and problem solving as we had some unexpected issues to contend with. Let me explain: After breakfast I usually tend to several housekeeping duties along with Paul and David. The Rovers need to be started, oil and fuel checked and driven around for at least five minutes to warm them up before the first EVA of the day. Then we come inside the Hab (from the Rover Docking Station) and we usually pump water from the external tank to the internal tank. Well we connected all the plugs but the pump would not come on. We looked at it every which way but just could not get the darned thing started. The water level was low to start with so I had to have everyone stop using the sinks and the toilet until I can get a better handle on the situation. Now we do have plenty of water. The external tank had at least a 100 gallons and the trailer potable tank three times as much. So in a pinch we can drop a submersible pump and transfer water. But I was determined to solve the issue with the pump. I was on email with Mission Support, the Mission Director (in the Netherlands), Engineering Support to get this issue resolved, because at a remote outpost like the MDRS issues usually don’t stop at a single source, instead they start to cascade into multiple issues with multiple systems failures. For instance if tap water is not used, the grey water supply goes down, if that happens the water required for the water recycling system stops working. When that happens the toilet backsup and then the whole water system comes to a grinding halt and then the pipes freeze and break and all goes to hell in a hand basket. So I started to take a serious look into the problem. At first I thought that the freezing cold of the night either froze the pipes or perhaps a piece of ice was caught in the pump. Checked that and found it was not an issue. Next, maybe freezing water was causing an issue with the water pump, so I turned ON a water heater. After a few hours the pump was still not working and now I started to get worried. Even Mission Support was getting a little worried. As part of the trouble shooting process  I started to look at other power systems that was powered by the same electrical circuit and noticed that the external heaters were not ON. Now I was on to something. Next I checked the external water heater that I had just turned ON and found it non-functional as well. So I did the next obvious thing. I ran an extension cord from the EVA airlock and as soon as I connected it to the pump it started working. Phew, I was relieved! I now have extension cords running power to the external heaters and the pumps. The issue was with a power system in the engineering airlock. Even with multiple procedures to troubleshoot the issue we still don’t have a solution. But it is not mission critical so we can try and fix it tomorrow or the day after. The rest of the morning consisted of GreenHab maintenance and Hab maintenance.

After all that running around I was quite hungry. Today is a non-cooking day, so lunch consisted of pasta and rehydrated vegetables, soup and tortillas. Not that bad. 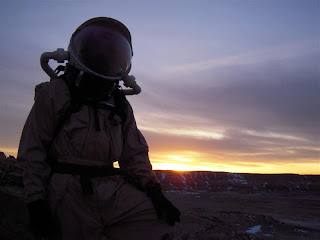 In the early afternoon Paul, David and I started to continue our work on our design of the radio telescope and we spent almost two hours working on it. It is absolutely critical for us to finish all of the planning and come up with a stepwise strategy in the Hab before we go out to conduct the assembly EVA. I believe we are off to a great start and hope to finish the assembly sometime early next week and get the radio telescope fully operational before we complete our mission.

The second EVA for the day (EVA#12) was conducted by Bianca, David and Steve who went on another geology EVA to collect micro-fossils.

We had an unplanned EVA (EVA#13) later in the afternoon when Diego and I decided to go on an EVA to Turtle Hills to a site where Brontosaurus bones had been found. Since it was close to the Hab, Diego and I walked but we had a very short EVA with only forty five minutes outside the Hab as we had to get back before dark. It was a spectacular evening and the lighting conditions were just perfect for an early evening EVA. We got back to the Hab just after sunset with another successful EVA under our belts. 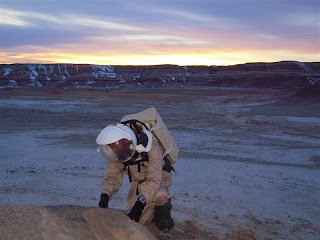 Looking for fossils in the Turtle Hills region

Evenings at the Hab is an incredibly hectic time trying to get all of our mission and engineering reports done and submitted to Mission Support. On top of that we cook dinner, complete our blog posts, swap pictures and video and finalize the day’s research. So if you watch the HabCam’s you will see all of us huddled over our laptops for most of the evening. Tonight we filed seven reports. This evening we also had to complete a Food Study Survey and a NASA Johnson Space Center Habitat and Lab Architecture Survey.

Dinner of rehydrated Texas BBQ Chicken and Chili was les than spectacular but today is sponge bath day and that is something I have looked forward for two days. So I have to sign off now and prepare for a bath and a good nights rest.

One would think that life on a remote outpost would be where time flies really slowly and the days seem long, but what I have noticed is that it is the complete opposite. Time flies at break neck speed here at the MDRS and we tend to need a pre-scheduled work plan for the day that we need to closely adhere to. The days are long and an eighteen hour day seems normal. But for a chance to spend two weeks at the Mars Desert Research Station, who can complain? What a chance I have been given and I am very thankful for the opportunity. 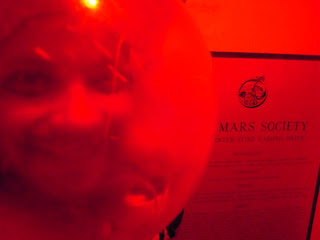 Back in the EVA Airlock on Red Mars

Posted by Laksen Sirimanne at 10:29 PM

Just wanted to let you know that I am reading ~every~ day (as well as David's blog), and am enjoying.

I am glad you are enjoying so much -- off to EU!

Glad to hear you're having such a great experience - lots of hard work too I think! Thanks for sharing - it's fun to follow!
Lori

Hi Tricia,
Greetings from Mars. Good to hear from you and I am glad you are enjoying the blog posts. The days are long here, almost 18hrs of work by the time we get done. But I am having a really good time. Have a safe trip and see you soon.
Laksen

Hi Lori,
thanks for the comment. Have you looked us up on the HabCam? Talk to you soon when I get back.
Laksen