NOTE: Intermittemt internet activity. Just received a connection so I am hoping this blog post goes through
- Laksen 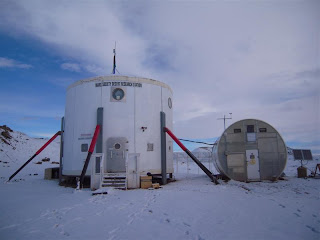 Early morning outside the Hab after a fresh snowfall

A cloudy overcast day today although OAT was around 40F. The outside of the Hab is a complete mess and is very muddy with the melting snow mixing with the red desert sand. You could barely walk outside and my boots were completely covered in thick red mud. It was also very slippery.

Today is a non-cooking day and since I am sick and tired of the packets of bread and also with oatmeal I decided to have a packet of beef flavored Raman instant noodles for breakfast.

Internet problems have plagued us for a couple of days now and it appears that the issue is with the satellite link. We are not certain of this and since we have no internet access other than Gmail with Mission Support we really cannot troubleshoot the issue from our end. 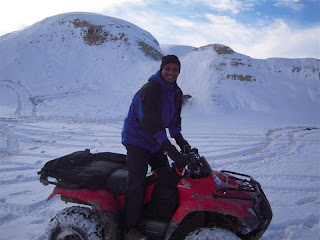 Having fun during the Rover Checkout

In the morning we completed several reports requested by Mission Support and the Mission Director. After that Bianca, Paul and I decided to attempt one more EVA up to the huge Mesa behind the Hab to GPS track the trail up to Radio Ridge Road, Copernicus Highway, then follow Brahe Highway and return on Schiaparelli Highway. Now, although these are called highway’s they are nothing more than ATV trails that are barely visible. Our first attempt to get up there via a trail along the Harris Hills was not successful. The trail was very steep and the melting snow and mud made the entire section very slippery and quite dangerous. We decided to turn around and follow a longer route down Lowell Highway and connect to Brahe highway near Sheep Knolls. We found only one trail that was visible through the layer of snow and followed that but came to a dead end. Later we found out that the road is aptly called Dead End Road. By this time the roads were completely turning into mud with huge puddles of water and small streams crossing the trails so we decided to turn around and head back to the Hab. Total EVA time was approximately 2 hours.

Lunch consisted of another packet of Raman noodles mixed with rehydrated onions, peas, carrots and Worcestershire sauce. This turned out quite nice.

Most of the afternoon was spent completing all the engineering checks and daily maintenance and writing reports. By late afternoon the internet connection had ground to a complete halt and we had no connection to the satellite uplink. I think I was one of the few people who got their reports transmitted (perhaps the only other person was David).

Dinner was really good. Bianca made a fantastic salad of sprouts (the second batch that Diego grew in the GreenHab) mixed in with rehydrated sweet corn. It was very good! The other dish was rehydrated Western style Tamale Pie with Beef which was OK. I also had a packet of bread. Yikes.

It’s 2100 now and I have finished my blog post for the day but with no internet connection I am limited by what I can do. So I might turn in for the night a little early. Paul has a copy of the movie District 9, so I might watch that on my laptop in the privacy of my cabin until the movie ends or I fall asleep... whichever comes first.

Tonight after dinner we ended the simulation and I did not hear any complaints from the crew. That means tomorrow is an open day for hiking (without our ASSs), perhaps a fossil finding walk, a trek to Olympus Mons and a thorough cleanup of the Hab. 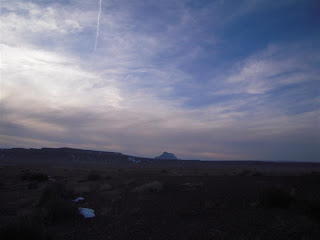 Posted by Laksen Sirimanne at 9:31 PM